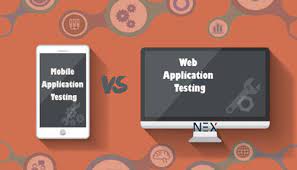 Suppose a product has a web and a mobile version of an app. Their functionalities are almost similar.
However, the application quality assurance process will take place for each platform due to its specific features in both cases.

Nowadays, a mobile app has become a generic term that covers three different types of applications: native, PWA, and hybrid. Each application is coded in a particular way and has some distinctive features and advantages over one another.

In the present era of eCommerce, one needs to be practically omnipresent in order to make his or her business successful. One needs to ensure that none from your audience whether on the big screen or the small screen is missed under any circumstances. There may be some of your customers who like to shop on the desktop while some others tend to prefer it at their fingertips on a mobile device.

A website displays merely text and data while on the other hand, a web application provides access to many more additional features. Not only do you visualize and read things, but you can also manipulate the restricted data.
Users pass authentication and can edit some items on different web pages. So when you use Facebook on your Smartphone via the pre-installed program, you are dealing with the mobile app. Suppose you are taking a laptop and opening a Facebook browser, then you are accessing social networks through the app.

Web applications are not supposed to work on the go. They are also relatively less complex as the diversity of browsers is not so surprising. The sheer number of user interaction options and environments in which the application is running is also typically smaller. As one can guess, the scope of testing procedures, as well as focus points, will be different for mobile and web apps. As one moves from web to mob, the amount of work begins to increase by leaps and bounds.

Web vs mobile: what is the difference in testing methodology?

Testing of a system application, such as a corporate network is vastly different as compared to testing a mobile application that could reach out to at least thousands, if not millions, of potential customers. Testing a mobile app also implies applying many different test procedures. As a result, QA teams face diverse challenges ranging from a corporate intranet to various other eventualities. We find that the contrast mainly lies in different, standard procedures.

Let's explore the divergence between these two test areas.

A web application running on a Mac or one will be useless without an internet connection. A native or hybrid mobile application, however, can have offline functionality. When data is disabled, users should still open an application and see a no internet message. The majority displays also cached content could load when data was enabled. Some games can be played without connectivity. For mobile, constant connectivity is important, especially if you occasionally have its web and mobile versions. It should be immediate and take a few seconds to sync across multiple platforms. User experience is necessary from the point of view of the tester. For developers, they only care how the system works, but for testers, experience is required to support users.

Many mobile devices are still shipped with only or 2 GB of RAM, as well as small 16 GB SSDs. These limitations place severe RAM constraints on storage capacity for operations in particular with respect to large amounts of memory and storage accessed by virtually any Modern web. In addition, services such as advertising platforms significantly slow down a mobile browser, de so that your web application on a phone or business can cause bottlenecks.

While testing the web, testers only tend to interact with the system by means of a keyboard or a mouse. But in the case of mobile applications, we typically interact by other means such as touch, sound, eye movement, agitation, and other gestures. This is why in testing we will have to grab the case of the test. All operations with browser-based applications occur via mouse clicks and buttons.

The dimensions of the desktop devices are limited. However, with mobile devices, each would vary one by one even though the difference is minor. You need to make sure that the features of your are visible on all screens and easy to access.

battery life is not of concern for desktop computers. This is usually an occasional priority for laptops we tend to use them primarily connected to influence power. During this time, an occasional battery on a device will complete the most basic options.

Testing tools
Choosing mobile application testing tools is not that simple. Some software options only work with a particular platform, some are compatible with native, web, and both applications.

Landing page development tips: How does one create a landing page for PPC?

Effective ways of ensuring heightened traffic to your website

Tips for getting the best results with paid marketing

Points to be noted while finding Quality SEO Services

How to select the most appropriate CMS platform for a leading e-commerce store?

Proven approaches for making money with free apps In 2021

Advantages of IoT for Businesses

How to enhance traffic on your site through content writing?

5 Smart Ways to Grow Your Business with Laravel Web Development

HOW VIRAL MARKETING IS PRODUCTIVE FOR BUSINESSES AND STARTUPS